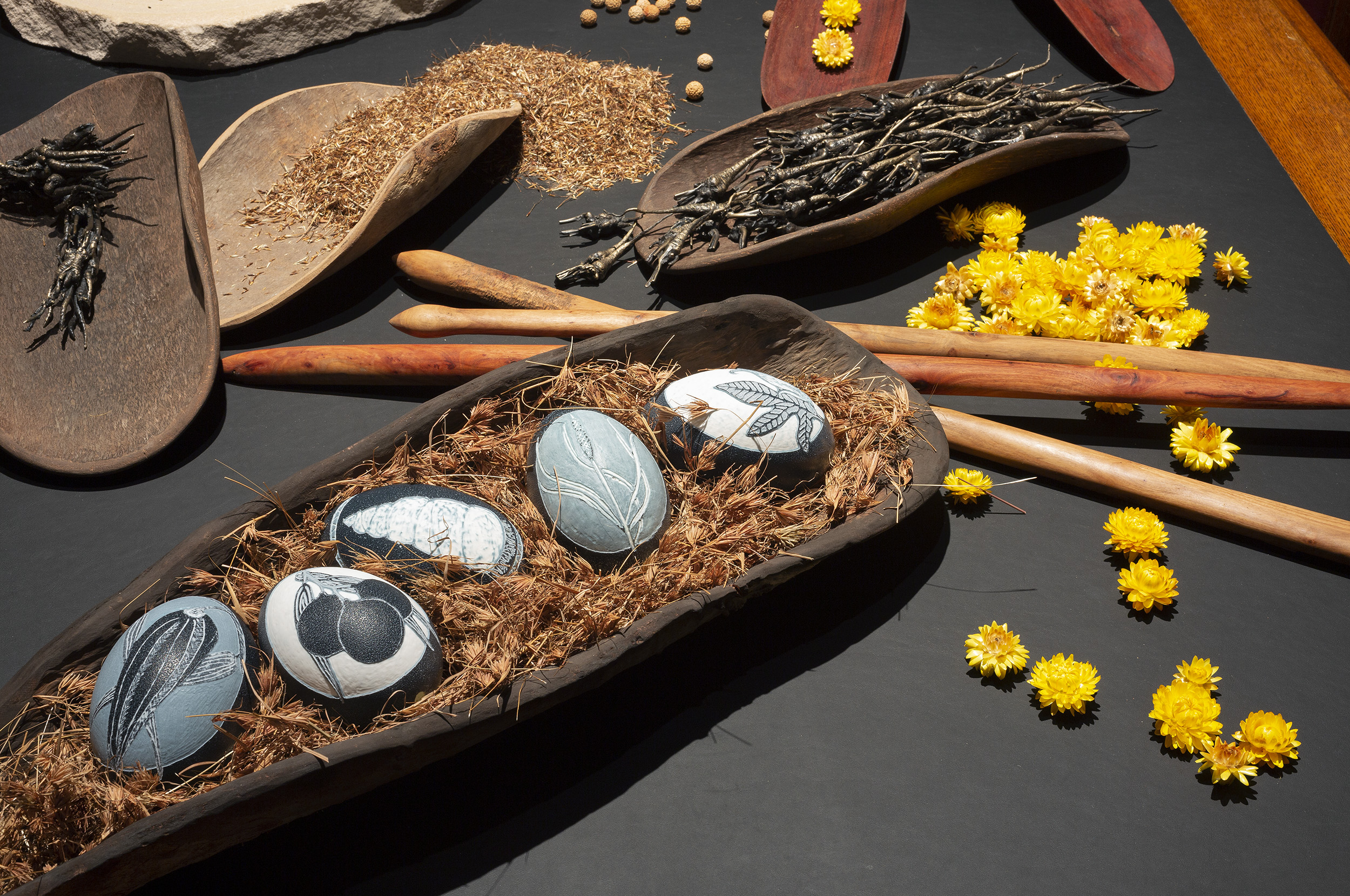 David Doyle speaks on the emu eggs he carved which feature in Jonathan Jones marrum (overflowing) 2021.

Dave is a Barkindji man who lives in Broken Hill. He creates beautiful works of art using resources from his country. This recording took place in the kitchen of an airbnb in Broken Hill. Dave brought with him an emu egg that he had carved images of quandong into.

Hi my name’s David Doyle, I’m a Barkindji descendant from Menindee on the Darling River.

I’ve carved lots of wood, turtle shells, freshwater mussel shells - but I decided I’d like to follow in my great grandmother's footprints by carving some of the emu eggs.
She started at about the age of 70 and she thought she needed to challenge herself and carve some of the most intricate stuff with a small box cutter knife.
So I’m not that good so I use an electric rotary tool. I like to think I'm doing her, a little bit of - I hope she's proud of me.
I try and stick to the traditional designs for our region and I do like the idea of using designs that our ancestors used rather than the more modern day stuff. But I like to incorporate that into modern materials and using modern tools so that I can get some smaller details in the smaller works.
So I think that’s pretty traditional for us now, we’ve - our ancestors painted the exact same things on the, on walls inside caves or carved them into stone, and we are still doing something very similar by passing the knowledge on and recording the images from our landscapes.
Like the parts I'll be doing are depictions of bush plants which will help record that we've used it, but also we’re recording that on a traditional canvas, if you will, in the form of an emu egg.

So I think probably one things to know is that carving emu eggs actually came out of our region.
It’s what our area started to do it as a trade, so we're actually keeping some of that tradition alive and recording on to that smaller canvas.

There’s seven different shades of green right down to white inside an emu egg. I can get about four, whereas Nanna could get the whole the whole range. So with the finesse of the blade she was just able to shave back, the most shallowest of cuts, and get the most beautiful smooth backgrounds and images. She carved an image of the man from Snowy River coming down the mountain on his horse, you know someone I who can do that is pretty special. [END]